In the Cursillo movement, being “in colors” is to be in God’s grace. For that reason, Cursillo participants (cursillistas, or candidates/pescadores in Tres Dias) greet each other with the phrase “De Colores” (in Colors).

A story from the early days of the movement in Spain tells of an occasion where a group of men were returning from a Cursillo weekend when their bus broke down. They began to sing De Colores, a traditional folk song. The use of the song in Cursillo took hold, and has held up as the movement has spread outside the Spanish-speaking world and to other denominations and three day movements like Tres Dias. The use of a multi-colored rooster as a symbol for the Cursillo movement is believed to have originated from one of the verses of that song. 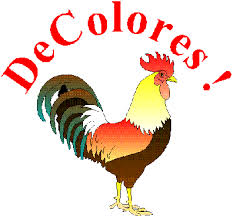